Your web browser is out of date. Update your browser for more security,speed and the best experience on this site.

Anyone born post 1969 can appreciate that we just won’t know what it feels like to witness something like the moon-landing event in terms of what it meant for how we as human beings saw what was possible, and how technological advancements would grow exponentially not long thereafter.

What’s so important about that date? Well for us here at Voltera, this was the date that Biggs et al., published their article in the journal Nature that was the moon-landing moment for additive electronics.

The transistor, or the neuron of all electronics, is a switch — the physical way that we get binary logic out of electronics. The more of these you put together, the more sophisticated a computer can be. The very first microprocessor, the Intel 4004 produced in 1971 was built using a ten micron (10 µm) transistor process, with 2300 transistors, running 92 thousand instructions per second — and we couldn’t do anything close to what we’re doing with microprocessors today. We have Moore’s Law to thank for that! It states that the trend for electronics would be that the number of transistors on a microchip doubles every two years, while the cost of computers is halved. By comparison, in 2016, an Intel® Core™ processor held 1.1 billion transistors, handling 320 billion instructions per second! If you want to learn more about the history of the transistor — Intel has some great content you can nerd out to.

Now, the material that we have been using since the advent of the microprocessor is silicon. It’s an excellent semiconductor, in that it’s either a conductor or an insulator depending on how you apply the voltage — but it’s a rigid material; inflexible and easy to break. The Holy Grail of electronics design has become flexible components on a flexible substrate; a dream that has yet to be realized with silicon because of its rigidity.

Don’t get us wrong, we’ve been getting better and better at using this material for microprocessors and have come up with some truly magnificent applications — but we’ve never been able to fix the flexibility problem. Until now, the best we’ve been able to come up with are two ways in which we can hack this problem:

The first of these options fails to really use the knowledge that we’ve garnered over the years, and definitely under-utilizes the infrastructure we’ve already built around the use of silicon wafers. The second is quite innovative, but still requires a lot of tooling and manufacturing in order to reach the desired thinness to the silicon. Shout out to NextFlex for all of their work — they’ve developed a flexible prototype based on the Arduino Mini which features a silicon die thinned to 35 µm.

The closest compromise that has been developed that tries to address this problem is Flexible Hybrid Electronics (FHEs) where there are traces printed on flexible substrates (like polyethylene terephthalate (PET), or polyimide), but still requires using inflexible components and, more specifically, inflexible microprocessors. 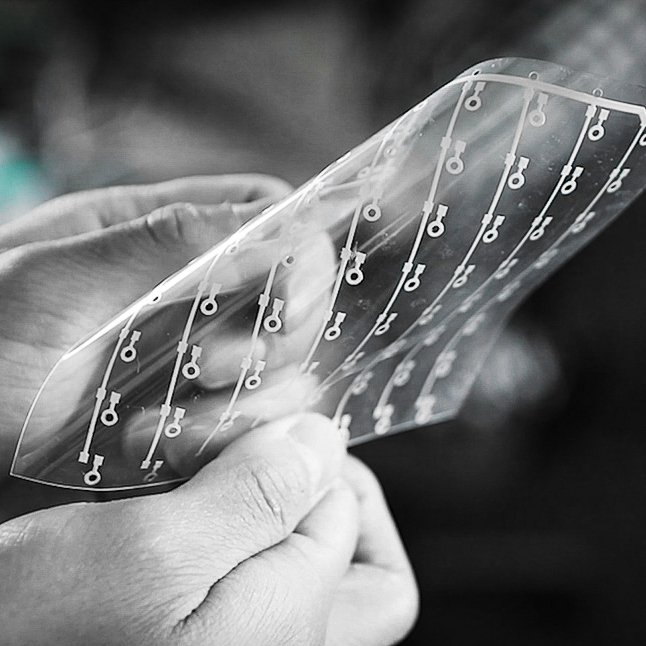 Now, here’s where things get exciting. Biggs et al., have essentially produced the flexible equivalent of the Intel 4004 — while still benefiting from the roughly sixty years of experience we have from trying to make silicon do all the things we’ve dreamed up.

We caught up with Matt Ewertowski, our Product Manager here at Voltera, to really get the skinny on why this is electronics’ moon-landing moment.

“The chip design that they’ve used is derived from the 32-bit Arm Cortex-M0+ processor and supports the Armv6-M architecture — this means that it is compatible with the same instruction set as other chips in the family. You could write modern-day software for this chip with all of the bells and whistles — hardware limiting, of course.”

This means that this discovery is even more impressive than the first 10 µm chip because we can actually do things with it.

“It’s very steampunk, in a way — implementing modern tools on hardware that we’d consider super outdated. It’s like if you flipped on an old school black and white antenna TV and it was running Netflix and connecting to WiFi.” This is the first time it’s ever been done! This is our moon-landing moment as people in the world of electronics — because now we know that it’s possible. And now we can start the same process that we did with the Intel 4004 — applying Moore’s law, making it smaller, faster, and more complex — and start removing the barrier of inflexible components from the design process.

Ask an Expert: Talking Applications with Rudy Ghosh from NovaCentrix

Field emission has a long history; it has been studied by researchers since the 1880’s. Propelling many breakthroughs in our fundamental understanding...

Today we’re going to dive into how Mohamad K. Idris and his colleagues at York University developed self-heating carbon fiber composites to be...

SPEAK TO AN EXPERT