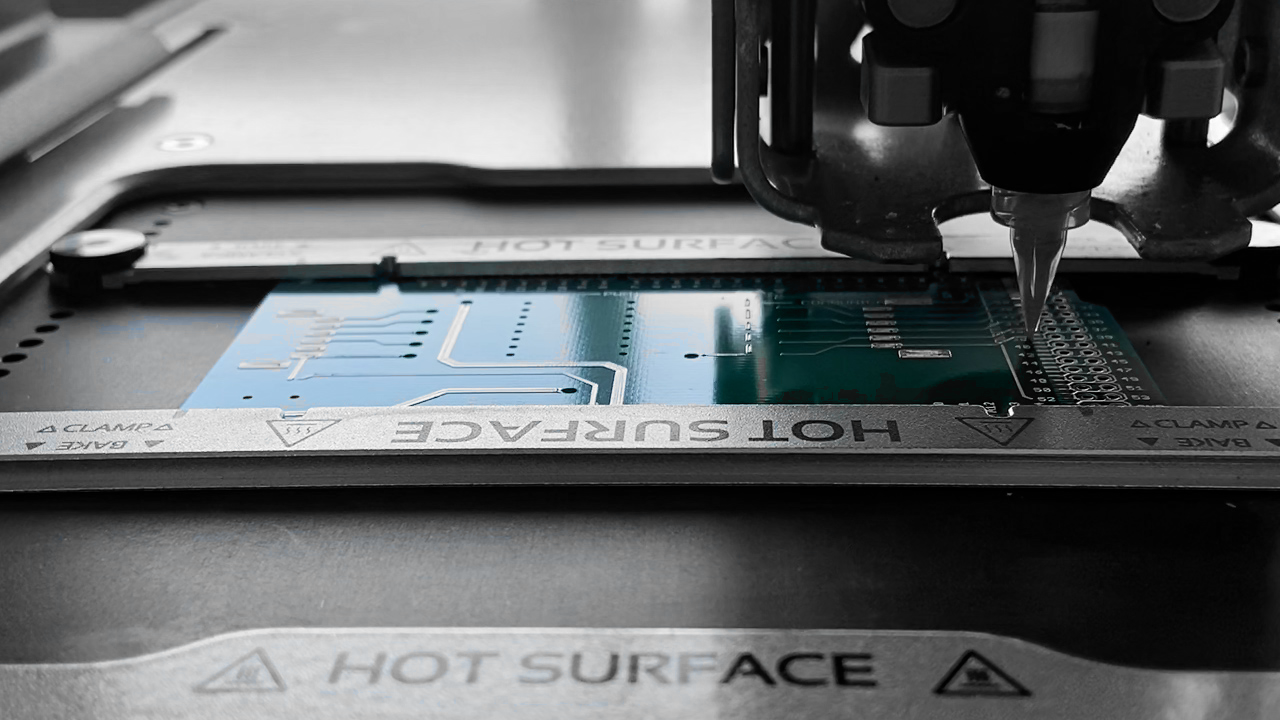 How to Build A Product in a Lockdown

Why Failure is a Good Thing

How to Sell a PCB Printer to Your Boss

When the COVID-19 lockdowns began, Matt & Rana were in the midst of a hardware development project: creating a cartridge filler for tubes of conductive ink.

Two members of Voltera's Materials Science team, one of their projects for months had been research in pursuit of a pesky bug: users reported that ink would occasionally leak from the tip of the nozzle when their dispenser was mounted to the V-One.

Conductive ink is a viscoelastic material so it should remain in the cartridge until pressure is applied to it from the piston. It shouldn't be leaking.

After conducting dozens of experiments, they found the main culprit: trapped air. Little bubbles of air trapped in the ink would act like tiny springs, storing up energy when the piston condensed the ink, and springing back when the force was removed. The movement of the trapped air would displace the material and force it out of the nozzle as leakage.

To remove the trapped air, the team would need to invest in a piece of equipment called a Dual Asymmetric Centrifugal (DAC) Mixer. This specialized mixer induced toroidal motion in the material to bring bubbles to the surface, then sucked them out with a vacuum. To get the degassed ink out to customers, they needed to find a way to accurately fill the ink into individual cartridges under vacuum.

They began to design a machine that would do exactly that, but that's when the COVID-19 lockdown struck. Machine shops closed, and the custom parts the team was planning to have made became hard to find.

Thankfully they had all the tools they needed to continue development from home. Rana was able to design the electronics in EAGLE and the mechanical parts in Fusion 360. The two were able to collaborate through these CAD tools and when it came time to build the parts, Rana was able to just email the files to Matt.

Matt had been creating a desktop additive manufacturing station in his living room. The electronics were printed on a Voltera V-One and the mechanical parts on a Formlabs Form 2. The electronics design was actually one of the easiest steps because they used the Arduino platform and an Voltera Arduino Mega template board.

Together, the two were able to get a working machine that could meter cartridges with vacuum-sealed ink on the same timeline they had set before the pandemic lockdown began.

Building hardware has so many challenges but we're glad that with modern software and design validation tools, it is becoming easier than ever, even while working from home!

This project was funded in part by the Government of Canada through the Federal Economic Development Agency for Southern Ontario.